The artist in residency Anders Nordby invites the collective of Norvegian artists, Institutt for Degenerert Kunst, of which he is a member, to exhibit in the Project Room of Wiels. The Institutt defines itself as the breakdown of a particular type of consciousness, the simultaneous collapse of several functionally separated associations. 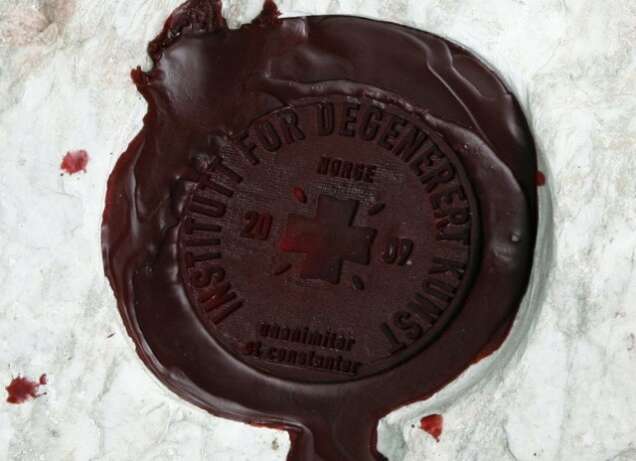 CHRYSAGIRE (the Gold of Expiation)

The "Greatness that was Rome" had so belabored the concept of 'cloaca maxima' and was so bent on cleansing the hands that its commerce soiled that, under Vespatian's rule, it went so far as to impose a tax on urine. In time, the tax amended by Constantine to include both human and animal excrement and was christened with the quintessentially refined name 'chrysagire'. Some call it 'lustral gold' or 'the gold of exipiation.' This tax was primarily levied on merchants and people of ill repute, both of whom were considered equally notorious. Beggars, whores, merchants, traders, and debtors were grouped together with dogs, donkeys, and other work animals – whose excrement was also taxed. They were grouped, in short, with the 'olfactory animal,' whose excessive concern with its own excrements (if one follows Freud`s lead) makes it the scorn of humanity.

It is surprising that only the residue of this practice – that famous saying 'Money has no smell' – has survived, since it patently states a truth that all political economies ceaselessly deny. Roman law speaks the gospel: Where one has sinned, one will be punished. You, who have abandoned yourself to commerce, you whores and dealers with your dirty hands and your reeking stench that drives away all who cross your path, you shall be made to pay in kind. Your shit itself will be taxed. Only an offering of gold, placed in the hands of the tax collector, can expiate you of your crimes. Only then shall you be washed of your sin, and what was once foul be transformed into pure power. Its stench shall be lifted from it, and we shall proclaim: non olet. Thus the kinship of gold and shit – a complex layering of sense and sensibility, a subtle network of equivalents, synonyms and antonyms – is forged.