Watch and listen to additional sounds around Lucy Raven's exhibition at WIELS.

In this exclusive podcast, Lucy Raven talks with producer and drummer Deantoni Parks about the compelling sonic treatment of the two videoworks on view in WIELS Demolition of a Wall (Album 2) and Ready Mix.

Art historian Philippe Pirotte discusses an —as of yet— unrealised project of Lucy Raven serving as the genesis of Another Dull Day.

George Herriman’s Krazy Kat comics, which were published between 1913 and 1944, feature an improbable love triangle between Krazy, Ignatz the mouse, and a doggish cop named Officer Bull Pupp. In response to Krazy Kat’s love for the mouse, Ignatz lobs bricks at her, which the cat mistakenly interprets as tokens of affection. Officer Pupp regularly intervenes to try to protect Krazy, with whom he eventually falls in love. Their cyclical chase plays out in Coconino County and Monument Valley, Arizona—other frequent “Old West” film locations.

Herriman’s comics are unmistakably set in these iconic landscapes, but the characters exist as if independent from their surroundings. From frame to frame, the action—alternately violent and mundane—advances with continuity while the background morphs entirely from one square to the next. The comics never offer an establishing shot, nor a fixed vista against which the action of a scene unfolds. Instead, individual motifs—cacti, mesas, and notably, Officer Pupp’s jailhouse—recur in reconfigured compositions. By imbuing the background with the kind of dynamic transformation usually reserved for characters, the comics externalize that often-interiorized shift. This radical inversion destabilizes the notion of setting from a fixed state into a volatile one, subject to continual change. In this sense, what first reads as a cartoonish hyperactivity could actually be understood as a time-lapse dispatch on the boundaries and borders of the early west.

Krazy Kat also has a soundtrack. Often written in all caps, POW!!!! BOPP!! PRRR-EET!! ERRR! signal speed, force, hesitation, impact. This wide-ranging onomatopoeia is amplified by all manner of lines indicating movement and sound. Forceful diagonal strike marks, smatterings of droplets, and short curves reverberating off every object or character make up the comic’s bassline. In concert, a silent musique concrète plays out in every strip. 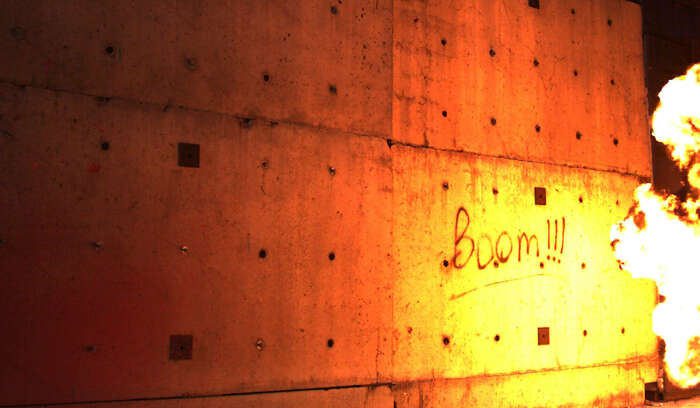