Spoken Exhibitions are live audio dramas devoted to forgotten, overlooked or mythologised chapters in the history of Polish culture of the 20th century. 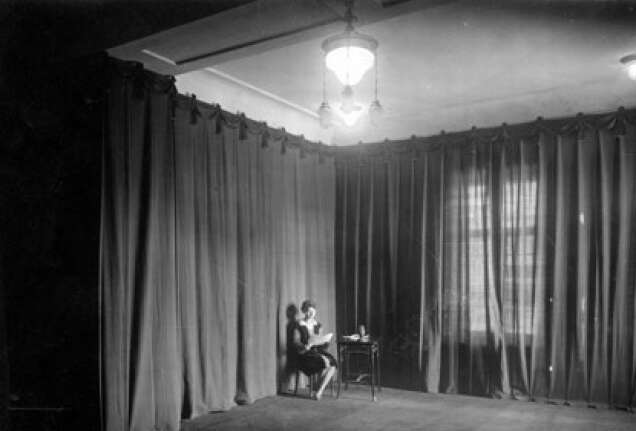 Alongside the accompanying publication, this act can be taken in as a curator-led tour of a non-existent exhibition, which could never come into being, gathering myths, "phantom" works and unverifiable eyewitness accounts, all related to the never-realised 20th century musical, architectural and artistic pieces. Here, traditional exhibition space is renounced in favour of auditoria, conference halls, offices, warehouses or radio waves. Spoken Exhibitions are also somewhat of a hilarious and unceremonious "institutional opera", or a staged expert lecture. The audio drama in three acts draws its inspirations from the artistic attempts at the "dematerialisation" of the work of art and experimental exhibition forms of the 1960s and 70s. It is centred on non-mainstream projects, familiar only to a handful of specialists, in art, music and architecture - never carried out or with their documentation missing. Spoken Exhibitions are a textual collage divided into roles, composed of both existing and imaginary notes, manifestoes and postulates of Polish artists. The floor is given primarily to avant-garde stances, and the evoked works are always "impossible", visionary and well ahead of their time.

Spoken Exhibitions scriptwriters: Sebastian Cichocki (curator at the Museum of Modern Art in Warsaw), Grzegorz Piątek and Jarosław Trybuś (awarded Golden Lion at the 2008 Architecture Biennale in Venice) and Michał Libera (curator, critic and music theorist).
The audio drama will be performed by the appointed representatives. The soundtrack has been prepared by outstanding instrumentalists: Patryk Zakrocki, Radek Duda and Wojciech Kucharczyk.
The exhibition catalogue - special edition of the periodical "Format P" - pretends to be a "libretto" of the piece, comprising the exhibition script in five languages and the soundtrack, which provides for further performances and interpretations of the audio drama.
Spoken Exhibitions will be presented in six European capitals: Berlin, Brussels, Madrid, Moscow, London, Kiev.