Don't Trust Anyone Over 30 is a satiric entertainment continuing Dan Graham's cultural analysis of the '60s, which began with his 1981 video Rock My Religion. Don't Trust was originally conceived to be staged as a puppet show like "The Fantastics," for the entertainment of former hippie (grand)fathers to see as a historical recreation by their (grand)children. Staged in numerous venues, the final performance at the Walker Art Center was filmed and is screened at WIELS following an introduction by the artist.

Dan Graham writes: 'Don't Trust is set in the late '60s to early '70s when the "hippie" tribes moved their "counter culture" settlements to the bucolic "wilderness" of the countryside. When Neil Sky is voted American president, he moves the White House to Camp David, where he does his press conference in a rustic hut/"go-go" cage. His first action is to abolish foreign alliances, mandating that all Senators and Congressman be re-located to a "concentration camp," where they are forced to take LSD with their drinking supply. The voting age for youthful voters and the lowest age qualification to be US President are both lowered to 14.’ 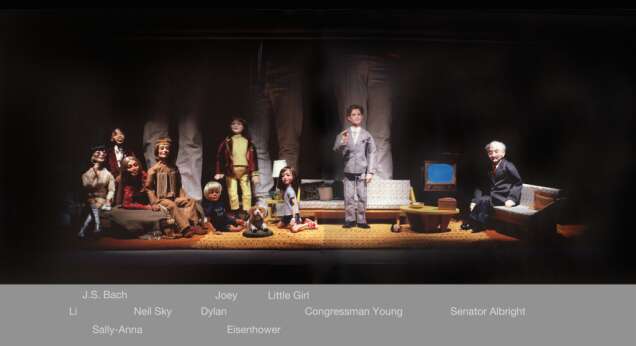 Dan Graham, Don’t Trust Anyone Over 30 (2004). Courtesy of the artist and Galerie Micheline Szwajcer