The seminar will discuss models of authorship from four different perspectives: Jonathan Monk (artist), Joost Smiers (legal theorist), Seth Siegelaub (curator, gallery owner and publisher), Luc Derycke (book designer and publisher). It will address the social context in which cultural works are made and communicated; legal constraints placed upon creativity and how these can be challenged; the role of repetition in the making of art and collaborative processes of authorship. 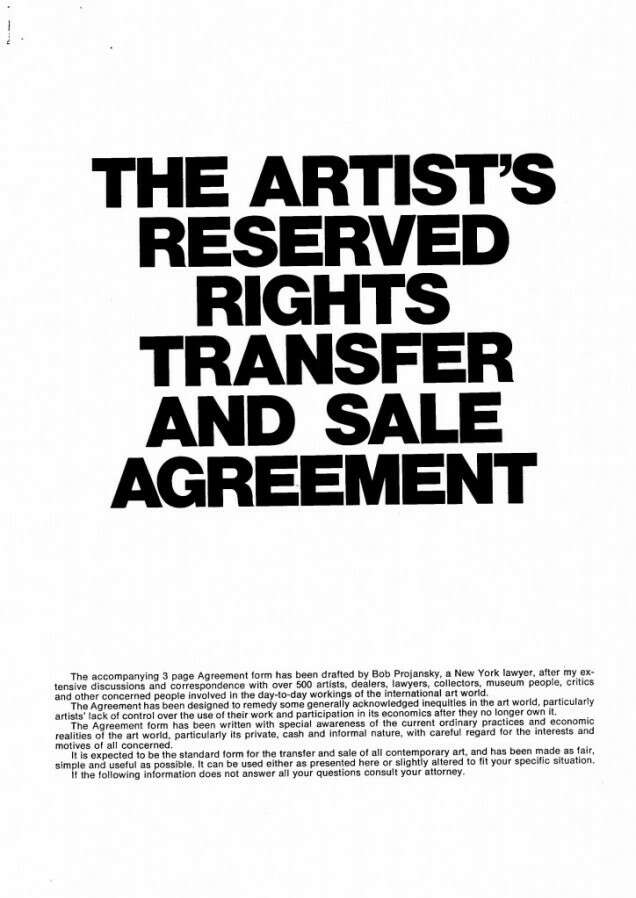 Luc Derycke has since 1990 designed hundreds of art books, art catalogues and artists books, and now operates with a small staff as Studio Luc Derycke. He also works as an editor and publisher. From 1989 till 1992 he was a publisher with Imschoot, uitgevers, Gent, Belgium; and from 1999 till 2007 was the designer of the Drawing Center Publications, New York. In 2000 he took up publishing again under the MERZ imprint, til in 2005 he thought his publishing activities would best be served by a non-profit organisation that he could share with others in the field. MER. Paper Kunsthalle now operates as a catalyst for book projects that do not claim to be artists books to the full extent, but still are, as art exhibitions, carriers of art, with all that entails.


Jonathan Monk's work includes a wide range of media including installations, photography, film, sculpture and performance. His tongue-in-cheek methods often recall procedural approaches typical of 1960's Conceptualism, but without sharing their utopian ideals and notions of artistic genius. Instead, Monk grounds his conceptual approach in more commonplace concerns, that of personal history, his family, even pets, whilst still alluding to the types of systems and processes that artists such as Sol LeWitt employed so rigorously. While much of his work is gently playful and tinged with nostalgia for the late 1960's, it also challenges the idea of purity in modern art, demystifying the creative process and suggesting alternative models for how art and the role of the artist can be interpreted. He lives and works in Berlin.

Seth Siegelaub was born in the Bronx, New York in 1941 and grew up in New York City. He has been active as a plumber; art dealer, publisher and independent exhibition organizer, including 35 art-related projects involved with what has since become known as "Conceptual Art", and the "Artist's Rights Agreement" from 1964 - 1971; a researcher, bibliographer and publisher of left books on communication and culture; a bibliographer of the history of textiles; and is currently a researcher studying the theory of time and causality. Recently he established the Stichting Egress Foundation in Amsterdam (www.egressfoundation.net) to develop these projects further. He has lived in Europe since the early 1970s and currently lives and works in Amsterdam.

Dr. Joost Smiers is Professor (em.) of Political Science of the arts, Research Fellow in the Research Group Arts & Economics at the Utrecht School of the Arts, the Netherlands, and formerly visiting professor, Department of World Arts and Cultures, UCLA, Los Angeles. He has written, lectured in many places worldwide, and researched extensively in the area of decision-making in cultural matters worldwide, on new visions on copyright and the public domain, on freedom of expression versus responsibility, on cultural competition policy, on the income of artists and their entrepreneurs, on European cultural policy, on Unescos Convention on Cultural Diversity, and on cultural identities (plural). Amongst other titles, he has written, together with Marieke van Schijndel, Imagine theres no copyright and no cultural conglomerates to... Free to download from http://www.networkcultures.org... McClean is an independent curator and lawyer specialising in art law and intellectual property law.
His recent exhibitions include, 'In-between Minimalisms', co-curated with Superflex at the Van Abbemuseum,
Eindhoven (April 2010) and the ongoing series of commissions, 'Offer and Exchange: Sites of Negotiation in
Contemporary Art' (2008-2010)(including projects by Carey Young, Santiago Sierra, Robert Barry & Stefan
Bruggemann and Goldin + Senneby) co-curated with Lisa Rosendahl and produced by Electra. His recent legal
projects with artists include the drafting of legal documents for Etienne Chambaud's exhibition, 'The Siren's
Stage' (David Roberts, Kadist and Nomas Foundations)(March-May 2010). He currently advises the Egress Foundation established by Seth Siegelaub on the construction of an art law centre. He has commissioned and edited two publications on the relationship between art and law, 'The Trials of Art' (Ridinghouse)(2007) and 'Dear Images' (Ridinghouse)(2002).