An interview with Christian Nyampeta

On the occasion of the launch of Christian Nyampeta's new radio play, titled The Africans: A Radio Play in Three Acts, WIELS curators Sofia Dati and Helena Kritis talked to the artist about this newly commissioned piece. 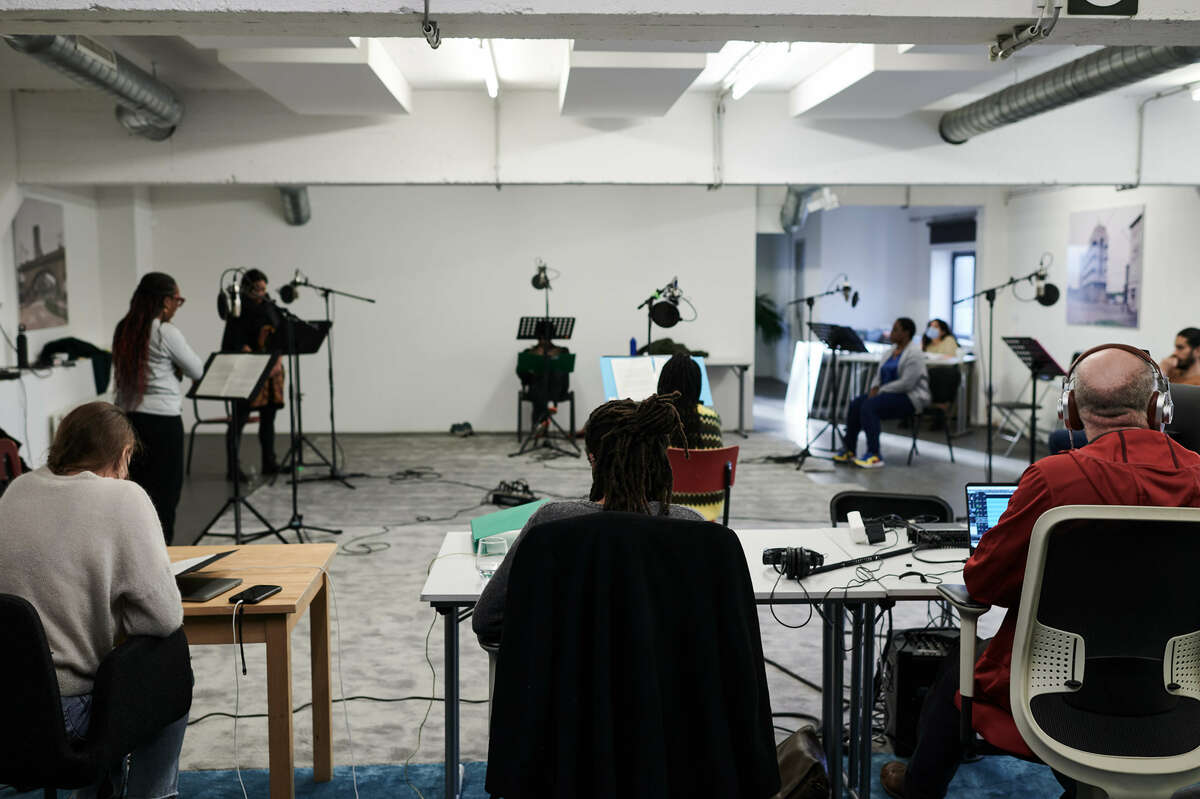 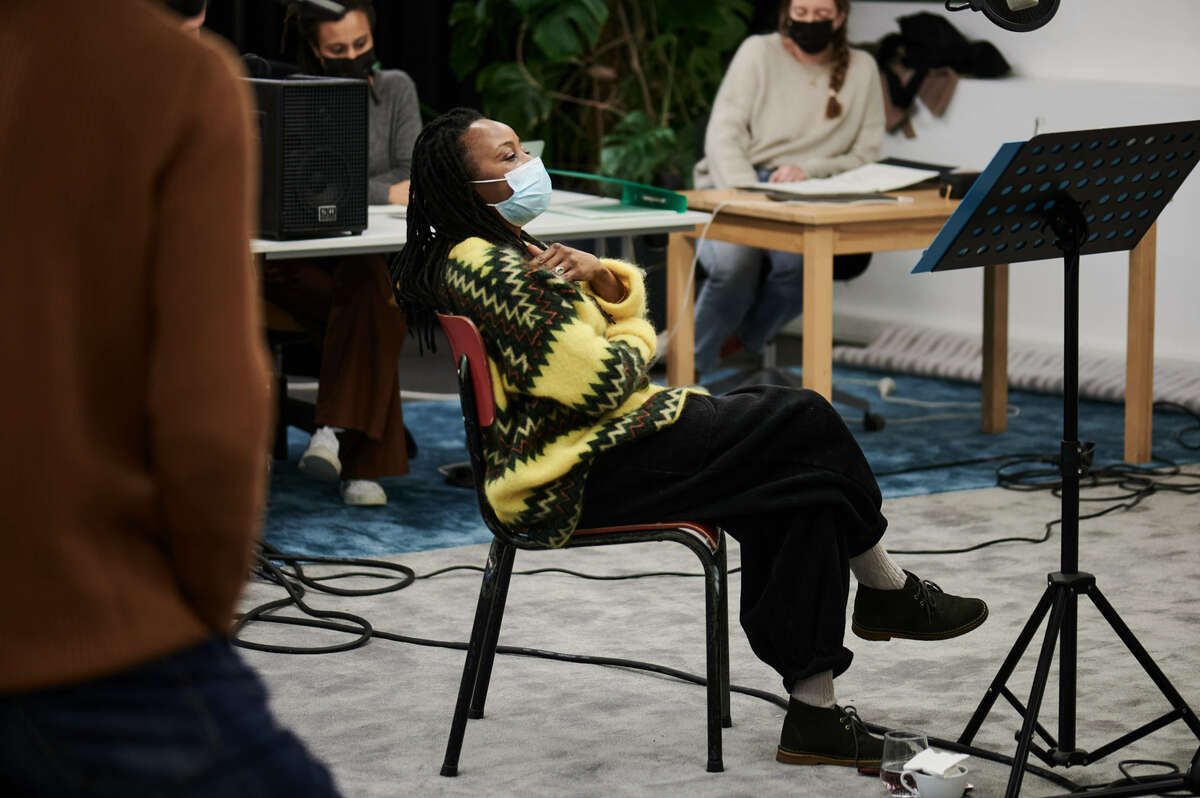 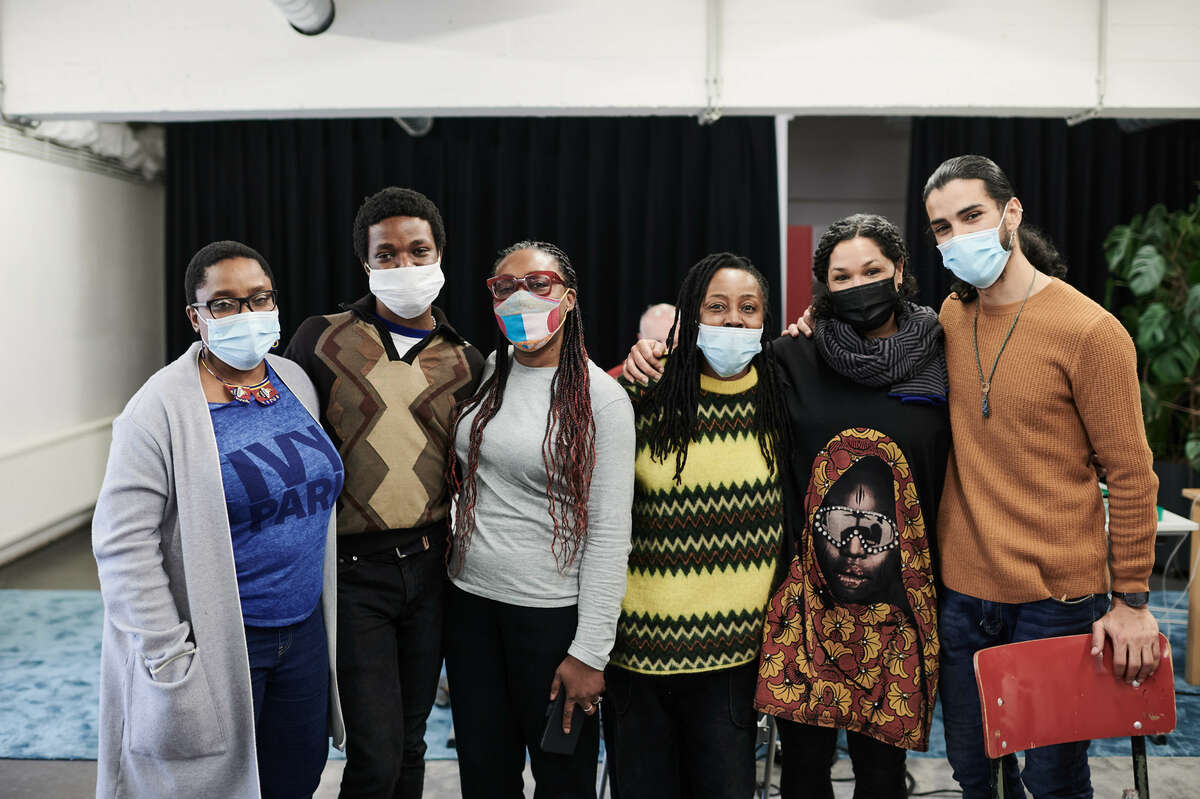 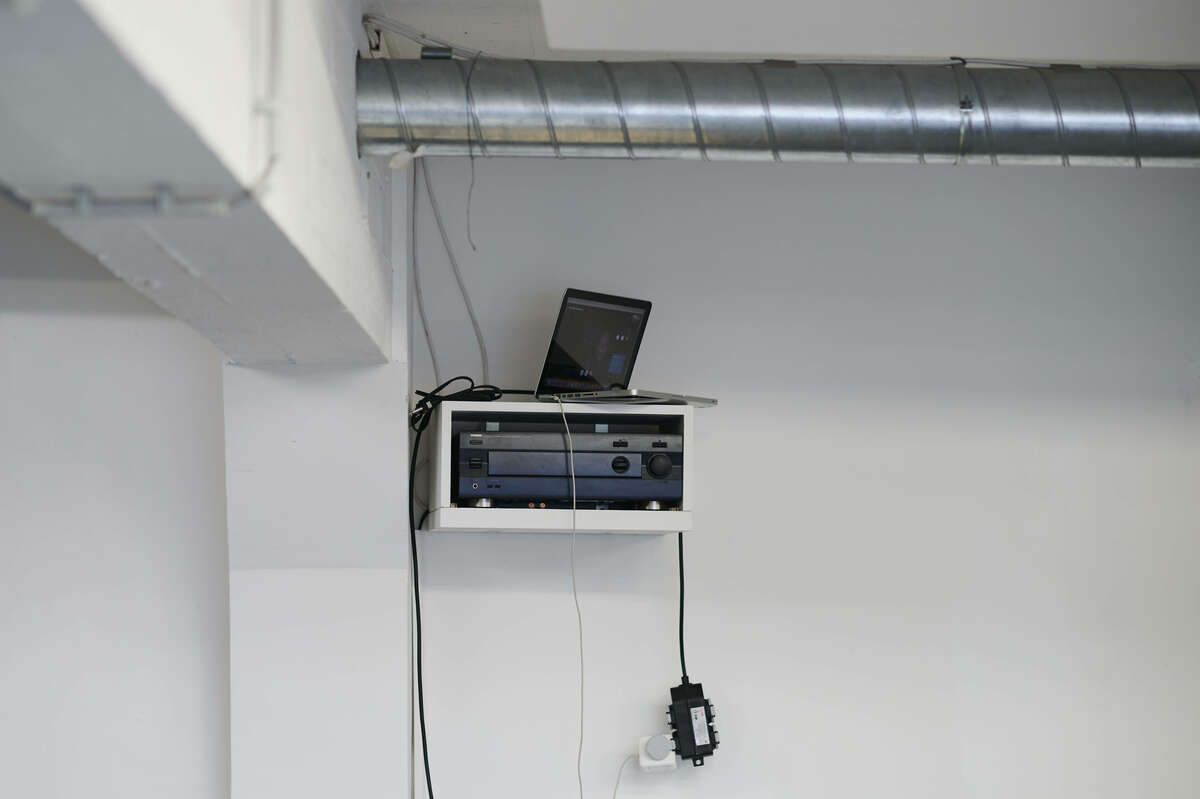 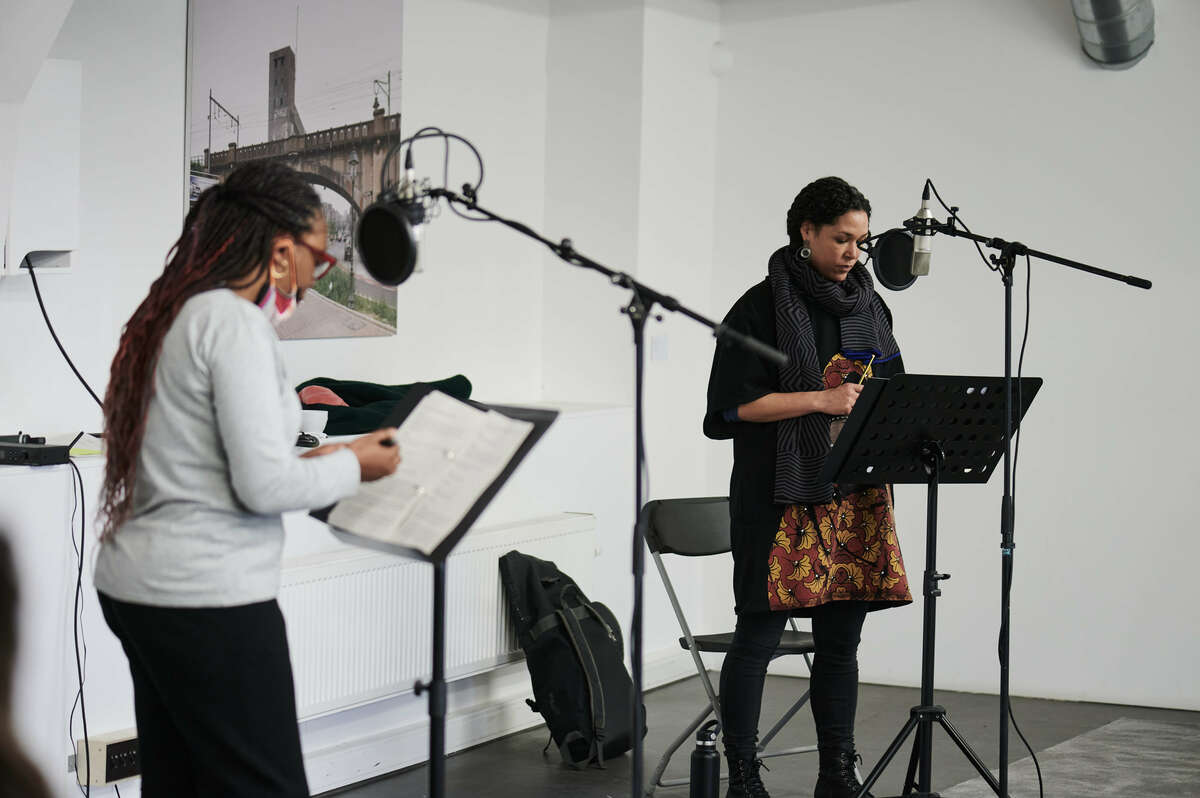 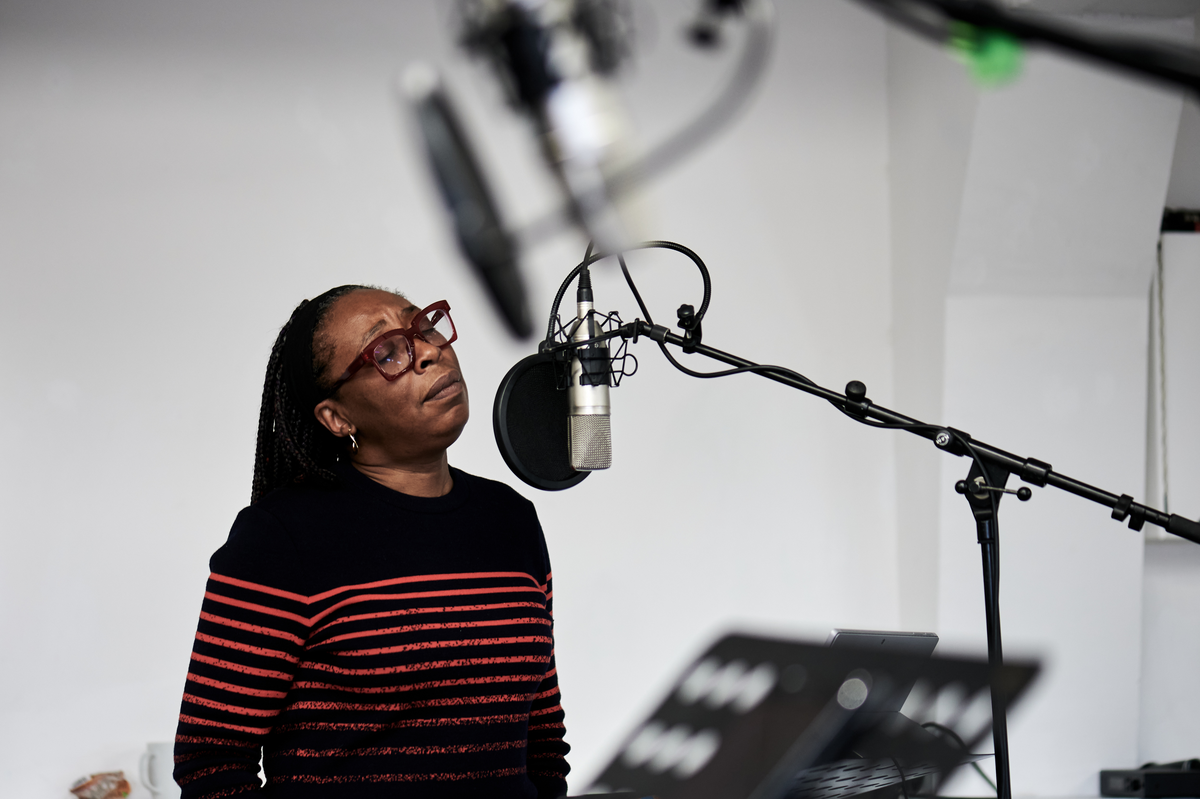 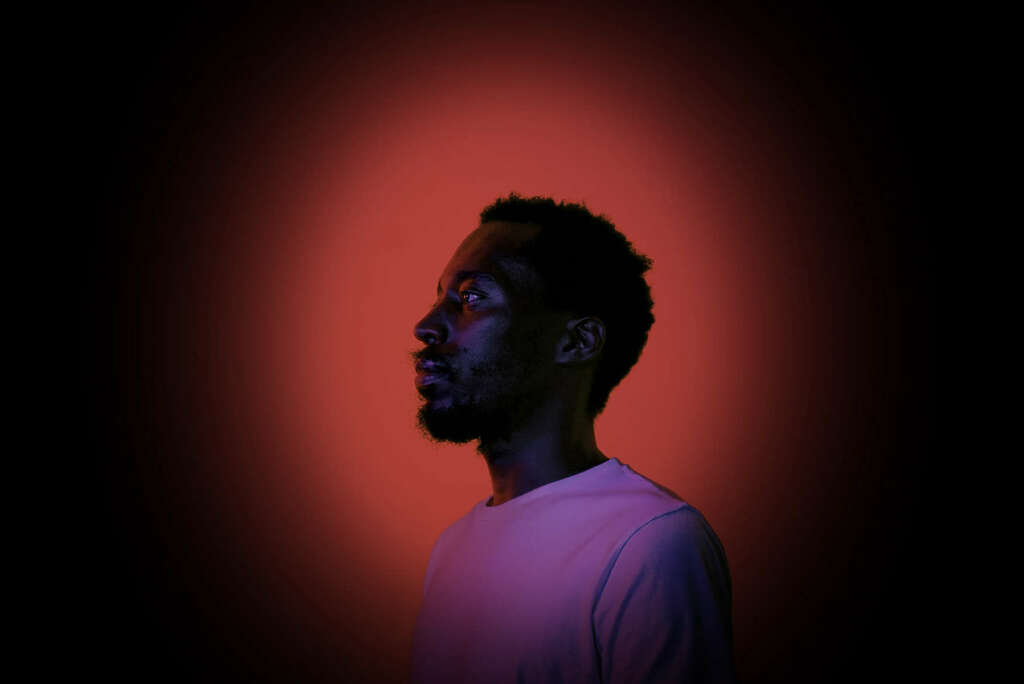 Sofia Dati & Helena Kritis - The Africans, A Radio Play in Three Acts is an adaptation of the 1971 novel The Trial of Christopher Okigbo by the late philosopher and political writer Ali A. Mazrui. How did you come across this novel?

Christian Nyampeta - I first encountered the book in 2012 in London through discussions with my mentor and PhD supervisor, artist Kodwo Eshun of The Otolith Group (with Anjalika Sagar). We’ve conducted enduring and still ongoing discussions about the history of ideas, especially “Afrofuturist” and “Afropessimist” literature by non-US African writers. I remember reading this book on my first trip back to Rwanda –which I hadn't visited for 14 years– and being completely shocked. I have this memory of me sitting in the backyard of where my parents now live. I had never been in that house and overall, I felt as if I was in “After-Africa.” I was at home, without really being at home. There I was, reading this book and feeling like I was the one on trial for having left, and also for being an artist.

SD & HK - The radio play raises questions about Panafricanism, civic duty and universal laws, the artist’s role within historically and politically charged contexts. What brought you to unbury these narratives today?

CN - The novel holds an idea that I keep going back to: a poet passes away, arrives in After-Africa and is put on trial. The ensuing debates function as a container for ideas, questions and problems I’ve been dealing with. Altogether, the novel is a search for the role of an artist in the face of pressing historical demands.

In the novel, the artist is Christopher Okigbo, the late Nigerian poet. The writer, Ali A. Mazrui, was Kenyan himself. Which shows how someone from Nigeria had a lasting influence on people in East Africa. From what I understood, this is due in part to Okigbo’s passing on the battlefield during the Biafran War in 1967, an event that signalled a shift in the course of the Pan-African futures.

"Radio has this way of connecting isolations; it allows cultural works to travel and circulate."

The prose of the novel is somewhat dated and even clumsy at times, but its wider themes remain very relevant; they resonate across borders, across generations, and also across the cultures in which the specificity of the book is rooted. The book also has a very personal meaning to me, not in biographical terms, but in terms of my own “sociography:” it helps to respond to questions that may affect most individuals working in the fields of culture at this particular moment in history. Over the years, I’ve returned to the novel and have generated various formats in response to it. In a way, my films are characteristically set in After-Africa, understood as a transient, dialogical spacetime that brings together echoes and dimensions that are usually separated by either physical limits of life and death, or by conflicting cultural and political affiliations.

The radio play is no different in that it is situated in this long line of artistic enquiry guided not by my “subjectivity” but rather by my sociography, since I learned from Kodwo Eshun who in turn learned from Sylvia Wynter.

SD & HK - What you call the radiophonic format seems to be in line with the ideas of collectivity, conversation and transmission that are very much embedded in your practice as a whole. Could you elaborate on your choice to work with this medium

CN - When I received this invitation from WIELS to contribute to what is now Risquons-Tout with a new commission, I was already in dialogue with Ntone Edjabe of Chimurenga who had invited me to think of a live contribution to the Chimurenga Library, which would host the Pan African Space Station in Paris. Needless to say, there were postponements, but the now forthcoming iteration of the Chimurenga Library in Paris engages with Black intellectual lives and histories in France, beyond US influences. I was thinking of making a play about After-Africa: a space-time populated by all the promises and contradictions that could be inscribed or described as “African.” Edjabe is of course no stranger to these histories; Chimurenga once published documents from the Okigbo archive. So, he was very encouraging. With After-Africa I wanted to address the awful linguistic divide between English, French and Portuguese within African studies. The divide is obviously not an essence of Africanity but a consequence of its history, marked by colonial domination. Also, the main protagonist, Hamisi, is a radio host.

And then, the most extraordinary thing happened: during the first meeting when I announced my proposal to WIELS, I learned that Sofia Dati, a member of the curatorial team I was working with, is none other than the granddaughter of Christopher Okigbo. That was the celestial spark. So, this radiophonic format is a time zone that fuses generations of changes endured across trans-familial lines spread over immeasurable geographic expanses into a new common world, while, at the same time, avoiding forceful amalgamation.

As Chinua Achebe wrote in an anthology commemorating Okigbo’s life: “Like all people caught in the mesh of modern war we soon became radio addicts. We wanted to hear the latest from the fronts. We wanted to hear what victories Nigeria was claiming next, not just from NBC Lagos, but even more extravagantly from Radio Kaduna. We needed to hear what the wider world had to say to all of that—the BBC, the Voice of America, the French Radio, Cameroon Radio, Radio Ghana, Radio Anywhere.”

I myself remember lots of radio moments! One of them indeed occurred during the height of the misery in Rwanda, when I chose to listen to BBC World Service on short waves. It offered this super distant and otherworldly voice that somehow made life bearable by keeping me from being pulled into the depths of despair, lassitude and euphoria. Radio has this way of connecting isolations; it allows cultural works to travel and circulate. Radio is obviously not neutral. On this point, the horrific history of radio in Rwanda needs no further introduction.

"In a way, my radio play is also a trial of the medium itself. But it is also an acknowledgement that, at significant turning points in my lifetime, radio has offered me invaluable company with voices and ideas that would otherwise have been really hard to come by."

But rather than being the exception specific only to that particular radio, all media engender their own conspiratorial discourse that operates intensively and affectively. As Kodwo Eshun would say, herein lies the problem with media: media actually reward dangerous forms of passion and, indeed, love to amplify that pernicious passion. I live in the US now and I can safely say that this is why the likes of Fox News, talk radio and so on all function in isolation and insulate themselves from any critique, which is to say, dialogue. This is also, of course, why some of the so-called “liberal media” channels amplify their own near-fascist discourses that they claim to oppose yet nonetheless continually broadcast. All media, of whatever leaning or tendency, amplify and, therefore, whoever is behind that amplification, whoever can control the intensity of the passion, will triumph. Ultimately, media is about volume or, in other words, about being the loudest, and this is where the Right often wins.


So, in a way, my radio play is also a trial of the medium itself. But it is also an acknowledgement that, at significant turning points in my lifetime, radio has offered me invaluable company with voices and ideas that would otherwise have been really hard to come by. My radio play is a modest contribution to this legacy. I would love it if a person in East Africa were to be exposed to these voices, or a person in Lagos or Accra or in the outskirts thereof, or a person in New York; a person anywhere really. This mobility, this affiliation motivated me to make a work that can exist beyond borders, and to think of this existence not as the documentation of a work that only thrives in a gallery. Rather, its mobility is intentional and the ethereality is constituent of the work itself.

SD & HK The play has been developed through a collaborative working process, involving other writers, artists and thinkers in a “writing room” and in the cast of the play. Could you describe this process and the impact it has on the work?

CN The radio play raises enormous questions that can only be addressed in the company of others and through forming communities of practices. I like works that are not so much “referential” but rather “compositional,” in the hope that all those involved share a sense of equality in the stakes of the entire process. Of course, I’ve had the arduous responsibility to create the play, but clearly it is based on a book that I have not written, and based on poems that I have not written. So, my play is merely a modest intervention within an extensive history of ideas. I would really want to highlight this aspect of humility. And to insist that without the effort of many others, none of this would exist.

The Africans, A Radio Play in Three Acts
Based on The Trial of Christopher Okigbo, a novel by Ali Mazrui

Written and directed by Christian Nyampeta

Additional sources include More Brilliant than the Sun: Adventures in Sonic Fiction by Kodwo Eshun, and Women and the Nigeria-Biafra War: Reframing Gender and Conflict in Africa, edited by Gloria Chuku and Sussie U. Aham-Okoro

Commissioned by WIELS Centre for Contemporary Art in the frame of the exhibition “Risquons-Tout”, curated by Dirk Snauwaert, Zoé Gray, Devrim Bayar, Helena Kritis and Sofia Dati in 2020

With the special support of the Flemish Government, Mondriaan Fonds, Africalia and The Embassy of the Kingdom of the Netherlands 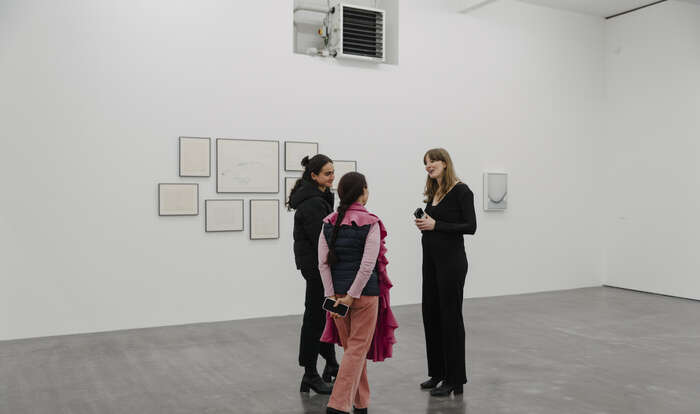 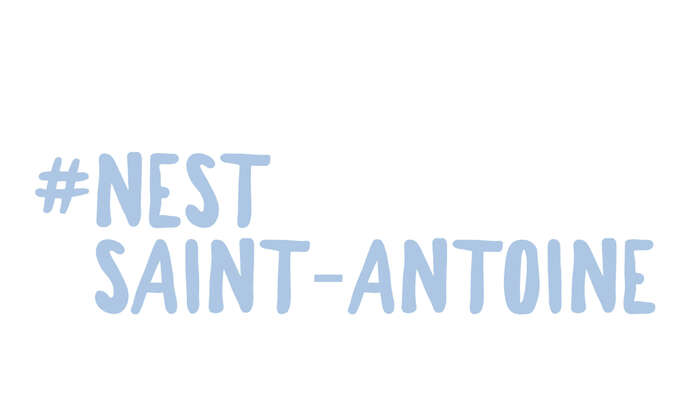 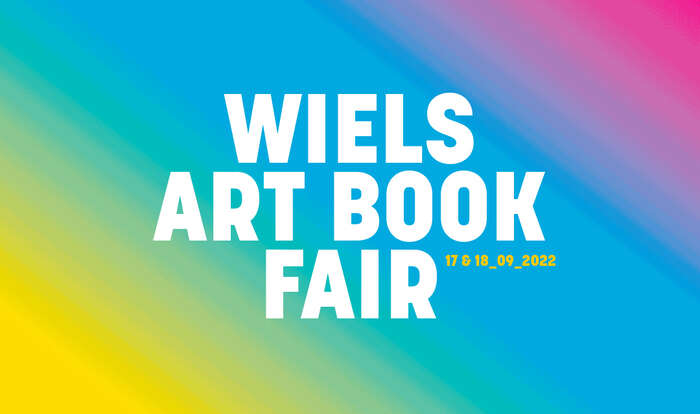