During the occupation of the Athens squares in 2011, a collective social and political experiment unfolded that laid the foundation for the rise of an unprecedented grassroots movement, organized around the principles of solidarity, direct democracy and equality. The experience of destitution and being attacked by the state paradoxically overlapped with the revelation that democratic self-organisation is not only possible, but that is also an intensely positive experience.

While preparing a docu-fiction film with and alongside the grassroots solidarity movement in Athens (vision for a citizen, 2017), artist Robin Vanbesien invites Daniel Blanga-Gubbay and Ana Vujanović to share their reflections on an 'imaginary of solidarity'. Blanga-Gubbay traces the production of vulnerability in the context of solidarity mechanisms in Europe, while Vujanović proposes the notion of the ‘transindividual’ as a possible horizon for performing the self. The evening will be opened with a screening of assembly for an Oresteia(2016), Vanbesien’s prelude to vision for a citizen, and will be concluded with an open discussion.

This evening is part of Robin Vanbesien’s research trajectory supported by Sarma, the Brussels-based laboratory for discursive practices and expanded publication. It is produced by Sarma and WIELS, with the support of workspacebrussels. 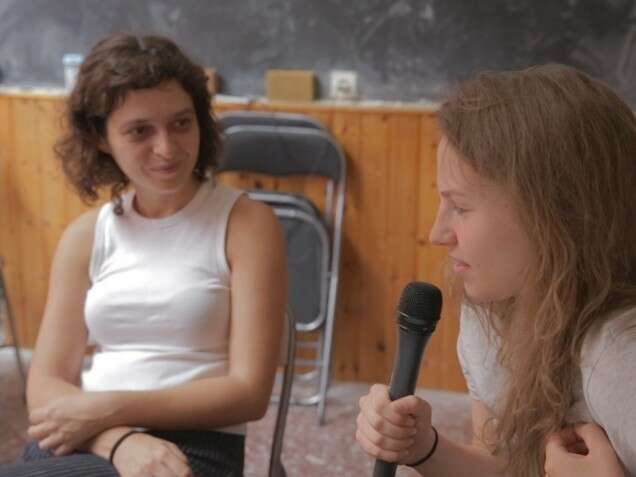 Evi Saoulidou and Bryana Fritz during rehearsals of "vision for a citizen" in September 2016, filmed by Yannis Drakoulidis. Production still © Robin Vanbesien