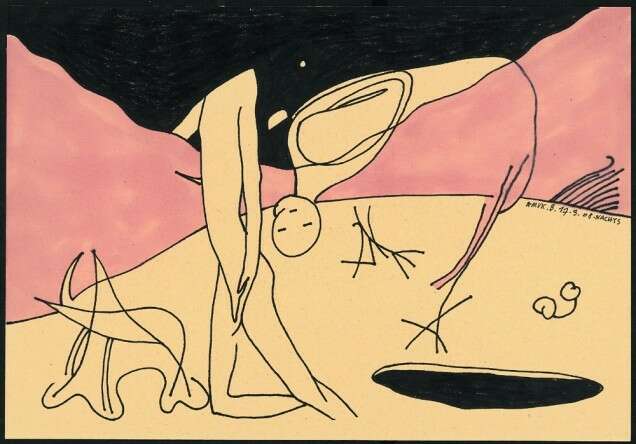 The (artistic) biotope of AMVK frequently arises throughout the HeadNurse project. Self-presentation is also a constant. It introduces a proposition in the oeuvre about a possible way of dealing with a condition that manifested itself fully in the second half of the sixties: the waning belief in the so-called "mysticism of the medium" and the dwindling attention to the particular motivation of the artist. Anne-Mie Van Kerckhoven is aware of this loss. Stylistic and media diversity and disbelief in the "trail" as a reference to the artist complicate the mediation of a situated view. Like other artists who are not satisfied with this, she consistently opts for a presence through a self-portrait. In fact, we see that this has been a recurring strategy since the 1960s. Philosopher Bernard Williams already stated in 1976 that physical identity is always a necessary condition for personal identity. If the artist wants to express his identity in his work, the presence of his body is required. Many artists faced this problem in the past. Bruce Nauman established his presence through a cinematic record of his behavior. His step into the open was prompted by trepidation and unrest. Vito Acconci translated this unrest into the staging of self-destructive action. Martin Kippenberger imbued his "selbstdarstellung" with torment and self-irony. Anne-Mie Van Kerckhoven shares with them the awareness of this step, but not from the idea of ​​an injured medial perspective. AMVK's self-presentation is permeated with protest, self-confidence, alertness, vigilance, these are images that inviting, looking, serious, but also vulnerable and expectant.

In the lecture, self-presentation is seen as an agent and guideline for the encounter and dialogue with an oeuvre in which resilience, future, difference, intersubjectivity and cross-border thinking are central.