Working mainly with video and group performances, Johanna Billing (1973, lives and works in Stockholm) is known for her investigations into collaboration and collective experience. Hovering between staged fiction and documentary, her films are a record of untrained performers participating in artificial situations set up by the artist. 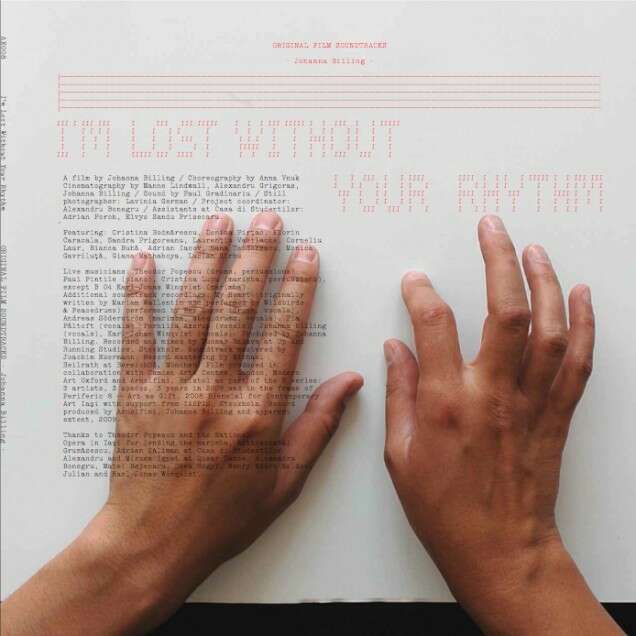 I'm Lost Without Your Rhythm is based on the recording of a live performance of dance learned' or performed by amateur Romanian dancers in Iaşi, Romania, during the Periferic 8 Biennial of Contemporary Art in Oct 2008. Film and soundtrack link several days' activity inspired by the works of Trisha Brown and Yvonne Rainer into a continuous process, in which dancers were watched by an audience who were free to come and go as they pleased. There is no final performance as such and so the work is a result of collaboration between choreographer, musicians, dancers and audience.

A vinyl LP of the soundtrack to I'm Lost Without Your Rhythm will be released by Munich-based independent music label Apparent Extent. The presentation through Apparent Extent chief Volker Zander at WIELS Bookstore incorporates a glimpse into Johanna Billings actual video work and photographic footage of the original Iaşi workshop as well as a display of her earlier soundtracks, the labels back catalogue and other AE printed matter.

Johanna Billing's work This is How we Walk on the Moon, 2007, was included in Documenta 12, Kassel, Germany, 2007. Other recent exhibitions include solo exhibitions Forever Changes, Museum for Gegenwartskunst, Basel, 2007; Keep on Doing, Dundee Contemporary Arts, Dundee, 2007; and Magical World, Saint Louis Art Museum, Saint Louis, 2007. She was also included in prominent group exhibitions such as Here We Dance, Tate Modern, London, 2008; Amateurs, CCA Wattis, San Francisco, 2008; Belief, Singapore Biennale, 2006; and Delays and Revolutions, in the Italian Pavilion, 50th Venice Biennale, 2003. Billing's works explore the intricacies of group dynamics and are often cause for meditation on idealism and democracy within community settings. The video work I'm Lost Without Your Rhythmwas produced in collaboration with Camden Arts Centre, London, Modern Art Oxford and Arnolfini, Bristol in 2009 as part of the 3 series: 3 artists, 3 spaces, 3 years.